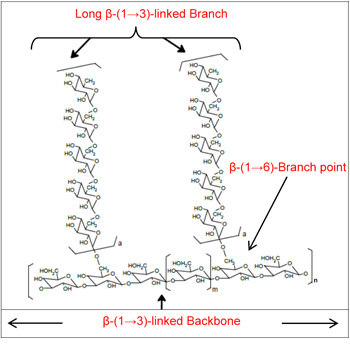 The Sources of β-Glucans

Bakers’ yeast as well brewers’ yeast has a long history of safe consumption. It has been used for over a thousand of years in the production of bread, wine, and beer. Although allergies to Sacharomyces cerevisiae from food consumption might occur, they are rare. In general, yeast products are very well tolerated. Yeast is rich source of beta-glucans.

The first group has short glycosidic chains bonds at β 1→3 and 1→4 position and it is water soluble. This group of beta-glucans reveals strong metabolic activty reducing elevated suger and lipid blood level (cholesterol).

Yeast is single-celled microorganisms classified as members of the fungus kingdom. Yeast is used by mankind for thousands of years. There are two main types of yeast: baker's yeast and brewer's yeast (wine and beer may slightly differ). The main property of yeast is that it consumes sugar (carbohydrates) and produce gas (carbon dioxide) or/and alcohol (ethanol) in a process called fermentation. Consumption of raw yeast may cause some side effects. Yeast processing significantly reduces and cooking or extraction eliminates any such risk. 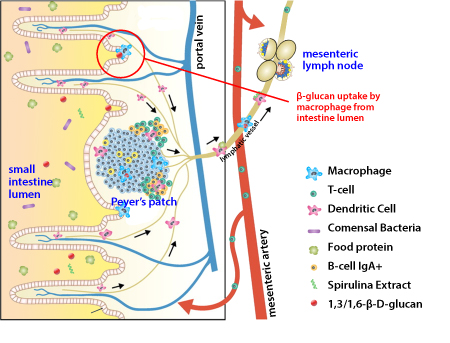 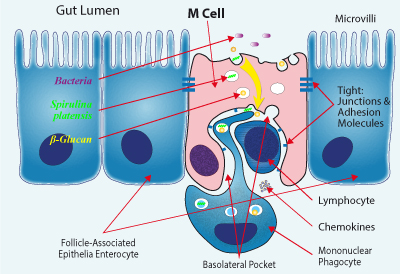 Uptake of large-molecule, insolouble β-glucan has been shown in mice with soluble and particulate yeast (1,3)-(1,6)-glucans labeled with fluorescein. Both types of yeast β-1,3-glucans were taken up by gastrointestinal macrophages via so called M-cells. Peyer's Patches are covered by a tissue that contains specialized cells called microfold cells (M cells). M cells have the unique ability to transport organisms and particles from the intestine to immune cells located in a pocket-like structure underneath. Those immune cells are macrophages, lymphocytes (T cells and M cells) and dendritic cells, which receives the antigens and delivers them to the other immune cells. These cells then moves to the lymph nodes where the immune response is amplified. The activated cells were also transported to the spleen and bone marrow. Also, in vitro experiments have shown that β-glucans were degraded inside macrophages and released into the culture medium, which makes them eventually available for the circulating system and a systemic distribution.

Orally administered β-glucans induced phagocytic activity, oxidative bursts, and IL-1 production of peritoneal macrophages in mice. A higher phagocytic activity and oxidative metabolism of neutrophils and monocytes, indicating an immune restoring activity of yeast β-glucan has also been shown in rats. However, not only the cellular but also the humoral acute phase immune reaction is affected by yeast β-glucan feeding as shown by increased lysozyme and ceruloplasmin activitiy.

In general, humans cannot synthesize β-glucans. Therefore, the immune system recognizes these compounds as foreign. The innate immune system responds to invading pathogens through pattern recognition receptors (PRR), which are typically expressed by immune cells but also by other cells. PRRs recognize conserved microbial structures, the so-called microbe-associated molecular patterns (MAMPs), formally called PAMPs. β-glucans are considered as one of the major MAMPs for the PRR-mediated sensing of fungal infection. So far, the most important PRRs for β-glucans are the dectin-1 receptor, the complement receptor 3 (CR3) and toll-like-receptors (TLR), which are found on various immune cells such as monocytes, macrophages, dendritic cells, neutrophils, eosinophils, and natural killer cells, but also on intestinal epithelial cells. Binding of β-glucans to dectin-1 induced a cascade of innate and adaptive immune response such as phagocytosis, oxidative burst, and the production of cytokines and chemokines in dentritic cells and macrophages. Kankkunen et al. showed that particulate yeast β-glucan triggered interleukin-1β (IL-1β) mediated cellular response in human primary macrophages via dectin-1 signaling. Earlier in vitro studies showed that yeast β-glucan is a strong stimulant of macrophages and induced mitogenic activity in rat thymocytes, indicating immunostimulatory effects.

Many investigations on the immunomodulatory effects of β-glucans were performed using parenteral applications. In the meantime, those effects have also been shown for orally applied β-glucans. Therefore immune stimulating effects may be achieved by dietary intake of yeast β-glucans.

However, not all β-glucan preparations have the potential to stimulate these reactions. In order to be able to activate the dectin-1 receptor cascade, β-glucans must comply with specific structural properties. It seems that insoluble, particulate (1,3)-β-glucans with 1,6-β-branches are able to activate this cascade, while soluble ones activate the antibody-mediated complement system via the CR3 receptor.

Numerous clinical studies and evaluation regarding β-glucan properties have been performed. They clearly have shown that administration of β-1,3-1,6-D-glucan significantly enhances immune system and has beneficial effect in various clinical conditions. The presented preparation is dietary supplement and EU regulation does not allow to attribute to such type of product any property of preventing, treating or curing any human disease, or refer to such properties. Hereinafter one can find some some links to published papers that are documenting clinical propreties of β-1,3-1,6-D-glucan